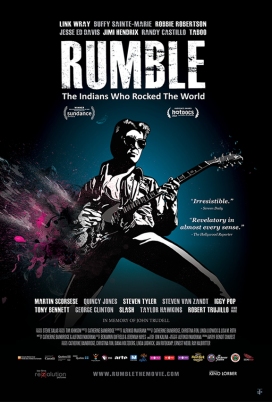 In RUMBLE, for the first time a film reveals a fascinating, and until now unknown, influence on the formation of rock and roll… The music that has become a part of who we are.

We are so honoured to be able to tell this story about the influence of iconic Native American musicians like Link Wray, Charley Patton, Mildred Bailey, Robbie Robertson, Jimi Hendrix, Buffy Sainte-Marie, Jesse Ed Davis, Redbone, Randy Castillo and Taboo.

We are excited by the incredible access we were granted to some of the world’s greatest rock stars who tell this important piece in the story of rock and roll. When you hear Slash, Stevie Van Zandt, Buddy Guy, or Steven Tyler speak about how these icons were an influence, you listen!

Native American music – born of this land – was violently suppressed for many years as both American and Canadian governments outlawed Native ceremonies and rituals in a deliberate attempt to break the people.

As a result, the music was forced underground and found its expression in alternative ways. Is it any wonder that one of the most powerful songs in the history of rock music – the song that helped start the revolution – was by a Shawnee Indian named Link Wray, and it had no lyrics? Just raw, powerful, distorted guitar. A powerful yell.

Legend has it Link Wray created the sound for RUMBLE by punching out holes in old speakers creating the revolutionary sound, which would become one of the most important songs in rock history.

Iggy Pop, Slash, Dan Auerbach, Wayne Kramer, Taylor Hawkins and Marky Ramone all tell us about the influence RUMBLE had on the evolution of rock. It was what made heavy metal and punk even possible. It is cited as an influence on The Kinks, The Who, and Jimmy Page among others. Pete Townshend said “He is the king; if it hadn’t been for Link Wray and ‘RUMBLE,’ I would have never picked up a guitar.”

But most of us have never even heard of Link Wray.

It is important to note that the primary drivers in the creation of blues and jazz and therefore rock were African Americans, but Native Americans, like Europeans, also played a part.

Take the creation of the Blues itself where the trauma of slavery, genocide and continuous violent oppression brought Native American and African American survivors together in many different ways. In those violent and frightening times – music was a healing balm, a clandestine protest and cry for freedom. All of the ingredients that helped make American music.

In North America, each corner, on each piece of land that we tread, where Indigenous people lived and thrived long before most of our ancestors did, lies a musical history that is precious.

We feel that it is important for everyone, and especially Native youth who have so few pop culture role models, to have proof, through the icons we feature and the famous people that give our story credibility, that Indigenous cultures were an integral part of the evolution of popular music.

The truth that we want to expose in RUMBLE is that the attempted erasure of Native American people, their culture, and their music, didn’t work.  As Robbie Robertson said in one of our interviews with him “you wouldn’t let me talk about it before, well now I’m going to talk real loud.”

Catherine Bainbridge, Director / Writer / Executive Producer / Producer, on RUMBLE, and Co-founder of Rezolution Pictures, has an accomplished career in media.  She has brought her signature enthusiasm and passion for storytelling to countless documentary, drama, comedy, and interactive media projects, notably the Peabody award-winning documentary “Reel Injun”, about Native stereotypes in Hollywood films.  Her role as Director on RUMBLE encapsulates her love and devotion to music, history, politics, and bringing important Indigenous stories to the mainstream.

Alfonso Maiorana is Co-director and Director of Photography on RUMBLE. Based in Montreal, Alfonso’s DP experience on Hollywood films, Independent features, MOWs, and television series brings a distinctive look and feel to the films he shoots. His directing credits include The Big World which premiered at the Montreal International Film festival. Passionate about music history and inspired by filmmakers like Jarmusch, Truffaut and Coppola, Alfonso’s combination of visual style and storytelling come together in RUMBLE.

“The influence of Native Americans on nearly a century of popular music is eloquently demonstrated in this engaging documentary.”
Justin Lowe, THE HOLLYWOOD REPORTER