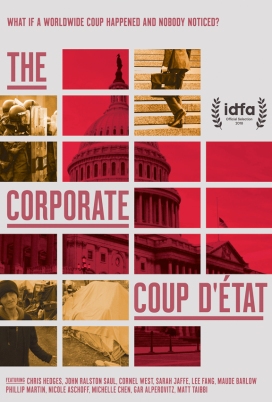 In the words of the Pulitzer Prize-winning journalist and author Chris Hedges: “Donald Trump is not an anomaly. He is the grotesque visage of a collapsed democracy. The creeping corporate take-over that began 45 years ago is complete. It has destroyed the lives of tens of millions of Americans no longer able to find work that provides a living wage, cursed to live in chronic poverty.” Following widely shown films as All Governments Lie, Manufacturing Consent and The Corporation — The Corporate Coup d’État examines what we’ve become, how we got here, and why some call it “a corporate coup d’état” in which corporations have taken over control of the U.S. political system.

As a former producer-director on the Canadian Broadcasting Corporation’s award-winning investigative television program “the fifth estate”, I became aware of the limitations of working in the U.S. mainstream media when I took a producer job in New York with “ABC News 20/20”. I have seen from “inside the beast” the slavish obsession with ratings that executive producers on journalistic programs at American networks have. And it has only become worse.

At the age of 19, I subscribed to a 4-page weekly newsletter written by the late, great independent investigative journalist I. F. Stone. I. F. Stone’s Weekly was an inspiration to me and to many others, and in 2013 I decided to try to make a documentary feature lm about I.F. Stone and the journalists following in his footsteps today, carrying on his courageous example of independent, investigative, adversarial journalism.

I was fortunate to team up with producer Peter Raymont, who also subscribed to I. F. Stone’s Weekly in his teens. A three-word quote from Stone gave us our title, and our subtitle paid tribute to him. ALL GOVERNMENTS LIE: Truth, Deception, and the Spirit of I. F. Stone received a standing ovation

This led me to come up with the idea for my new feature documentary, The Corporate Coup d’État.

Noted Toronto author and lecturer John Ralston Saul was ahead of his time when he observed in his CBC Massey lecture in 1995: “It could be argued that we are now in the midst of a coup d’état in slow motion. Democracy is weakening; few people would disagree. Corporatism is strengthening; you only have to look around you. Yet none of us has chosen this route for our society, in spite of which our elites quite happily continue down it… Certainly corporatism is creating a conformist society. It is a modern form of feudalism.”

As Pulitzer-winning journalist and author Chris Hedges (who often quotes Saul) said recently: “Donald Trump is not an anomaly. He is the grotesque visage of a collapsed democracy. The creeping corporate coup d’état that began 45 years ago is complete. It has destroyed the lives of tens of millions of Americans no longer able to find work that provides a living wage, cursed to live in chronic poverty.”

I want to make a lm that reaches out to the world with a powerful cinematic treatment of the above core message. The Corporate Coup d’État is a lm that’s urgently needed, and it can and will make a difference.

Fred Peabody recently directed the 2016 theatrical release All Governments Lie: Truth, Deception, and the Spirit of I. F. Stone. Fred is an Emmy-winning journalist and filmmaker whose credits include seven years as a producer-director on the acclaimed CBC investigative program the fifth estate. In 2003 he was Supervising Producer on Perfect Illusions, a PBS documentary about eating disorders in young women. His lm on the childhood exploitation of the Dionne quintuplets was nominated for an Emmy in 1998, and he won an Emmy in 1989 for a lm about wild horses rescued from starvation and abuse.